Navigating The Way For Vehicles Of The Future

In 2010, Robert Ziegler’s GPS got him stuck between a rock and a hard place. Literally. He had driven his white van off a main road and up what locals described as a “glorified goat path”, making it almost to the top of a remote alpine summit in Bergün, Switzerland. When the van finally got stuck, it was wedged between a stone wall holding back the mossy, 60-degree incline slope to the left, and a wood-rail fence on the edge of a stony, straight-drop cliff to the right. “I kept hoping each little turn would get me back to the main road,” he said after being rescued from the top of the mountain. “In the end, [the GPS] told me to turn around but, of course, by then I couldn’t”. Mr Ziegler’s goat path adventure ended with a helicopter evacuation and a viral story about the danger of human error when working with automotive navigation systems.

Today, ten years later, we’re on the threshold of a new age in automotive technology — characterised by self-driving, connected and automated vehicles. To keep everyone safe on the road, we need to ensure our new, high-tech chauffeurs don’t fall into the similar traps in which Mr Ziegler found himself. “To make self-driving cars a reality, a lot of technological development is still required, making this a vibrant research field,” says Prof. Raphaël Frank, Head of SnT’s 360Lab, a research laboratory entirely focused on smart mobility. One of the new technologies that automated vehicles require would have been very helpful for Mr Ziegler back in 2010: foolproof maps. Thanks to a new partnership with Silicon Valley start-up Civil Maps, researchers here in Luxembourg will help refine and expand the technologies that enable the high-definition maps that vehicles of the future will depend on.

"By teaming up with highly reputed universities such as the University of Luxembourg, we see incredible potential in what we can build together.”

Civil Maps’ high-definition (HD) maps provide automated vehicles with all of the information that attentive humans would traditionally have gotten from road signs and visual cues. They include the small details that many navigation systems don’t include, or that can be overlooked due to human error. In fact, the detail included on HD maps isn’t just two or three times better than the digital maps we’ve all become accustomed to. The difference is exponential; and the resulting maps are accurate down to 15 centimetres, providing automated vehicles much of the information needed to make up for the lack of human eyes on the road. “We see Luxembourg as the European hub for innovation in the smart mobility sector,” says Stefan Safko, CEO of Civil Maps. “By teaming up with highly reputed universities such as the University of Luxembourg, we see incredible potential in what we can build together.”

"To make self-driving cars a reality, a lot of technological development is still required, making this a vibrant research field."

Luxembourg is a growing, dynamic hub for automated driving technologies. “We are dedicated to becoming Europe’s top living lab for autonomous driving,” says Joost Ortjens, Head of Business Development Automotive at Luxinnovation. His organization has played a key role in supporting and expanding the country’s budding automated vehicle sector — including fostering the new partnership between Civil Maps and SnT. “Scalable and commercially viable HD mapping technology, as provided by Civil Maps, is definitely a missing part in the European autonomous driving ecosystem. We are supporting this start-up in the development of their European business, and assist their research needs as we work towards our mutual goals,” adds Ortjens.

The partnership between SnT’s 360Lab and Civil Maps will help bring HD map technology to the Cross Border Digital Testbed, a tri-national cooperation between Germany, France, and Luxembourg.  Together, this cooperation will explore the autonomous mobility innovations and opportunities that may soon help enrich our shared community. With HD maps in the mix, we can all be a little more certain that tomorrow’s transfrontaliers will arrive home safe and sound — and without unexpected adventures. Navigating the Way for Vehicles of the Future 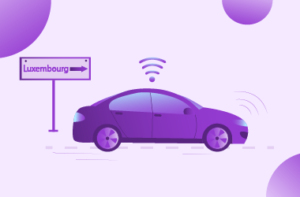 How Luxembourg is Driving the Future of Smart Mobility